The most geothermal city in the world

The city of Beppu is located on the shores of the bay of the same name, on the Seto inland sea, in the prefecture of Oita on Kyushu Island. Its emblems are the camphor tree and the rhododendron. It is located about 6 hours from Shinkansen in Tokyo and 2 hours from Fukuoka.

Beppu is best known for its hot springs (onsen), with nearly 3,000 in the city, which has earned it the status of “the most geothermal city in the world”. There are therefore many establishments and baths for visitors who wish to relax. There are also the Beppu Eight Hells (Jigoku Meguri) which attract a large number of tourists from Japan and around the world every year, for their colours (red, white, blue) and spectacular character, but you can’t swim in them. The walk is a change of scenery, with a path that winds between the open-air pools. The other onsens in Beppu are open for swimming. In the Myoban district, you will find a wide range of atypical baths such as mud baths.

The most beautiful views of the city are from the top of the Beppu Tower panoramic observatory (55 m high), or from the top of Mount Tsurumi, which is accessible by cable car at an altitude of 1375 metres.

Around Beppu, do not miss Yufuin, a spa located at the foot of Mount Yufu (1 hour and a half by train or 50 minutes by bus); or the port of Usuki, with its samurai district dating back to the Edo era and its well-preserved old houses (1 hour by train). Between Beppu and the city of Oita, you can also visit Takazaki yama Monkey Mountain, a nature reserve, part of which is open to the public and where 1,500 Japanese macaques have made their home.

Beppu’s culinary specialities are based on seafood: steamed shellfish, but also fugu, a fish that turns into a poison if it is not properly prepared! As an anecdote, the Emperor of Japan is not allowed to eat them… Not surprisingly, there are also culinary specialities steamed in the “hells”, such as onsen tamago (eggs), or jigoku mushi puddings (small caramel creams). 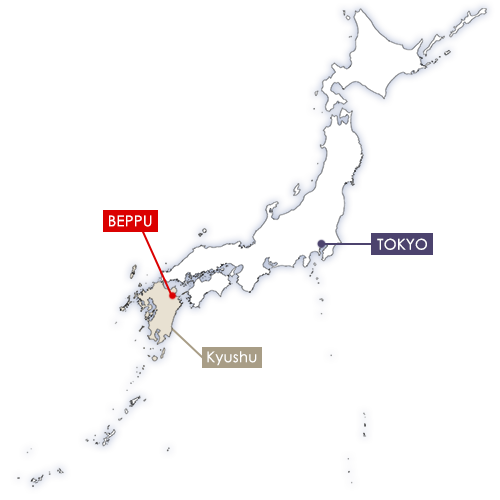 Where to sleep in Beppu