The city of Western Tohoku

Akita is the capital of the prefecture of the same name, on the island of Honshu. It has a very rich history, first as one of the major cities of the Tohoku region since medieval times, organized around Kubota Castle; then today as an industrial (oil, chemistry, wood, etc.) and academic city, with Akita University.

Akita is very well served from Tokyo, either by air with ANA and JAL (1 hour flight) or by train via Shinkansen (a little over 4 hours drive).

The first tourist site of the city is of course its castle, the castle of Kubota. The historic home of the Satake clan, it is now on the Japanese Castle Foundation’s list of one hundred outstanding Japanese castles. There is the Satake Historical Museum, which traces the history of the Satake clan, as well as an old samurai house, the Kurosawa house, classified as a national cultural property and installed since 1988 in the castle park, Senshu Park. This one is a small wonder, especially during the flowering of cherry trees.

Also worth visiting in Akita: the samurai Aoyagi’s house-museum, one of the best preserved in Japan, where you can discover an impressive collection of objects from this samurai dynasty. Museum lovers will not miss the Akita Museum of Fine Arts, where you can find the gigantic canvas “Events in Akita” by the painter Foujita (20.5 m long x 3.65 m wide). Then comes the glass tower of the port, which can be seen from afar with its modern architecture.

In terms of friendliness, Kawabata Avenue is the most lively district in the city and has a large number of restaurants. Namely that the specific noodle dish of the region is the Inaniwa udon.

Around Akita, there are many things to do. A detour to the Oga Peninsula is not to be missed, including the Godzilla Rock, a rock of volcanic origin, or to the Mount Kanpu Observatory.

The region is also known as the cradle of the Akita Inu dog breed, the breed from which the famous dog Hachiko, with its moving history, was born and which inspired the American film “Hachi”. 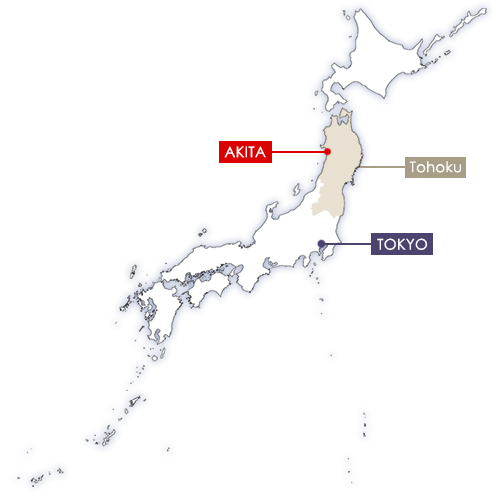 Where to sleep in Akita