The merchant town and its canal

Kurashiki is a town in Okayama Prefecture, located in the western part of the Chugoku region on Honshu Island. Sometimes referred to as the “Venice of the Edo Era”, it is famous for its canal lined with former traditional warehouses and for its medieval atmosphere.

To get to Kurashiki from Tokyo, it takes about 3 hours and 50 minutes by train with a change to Okayama, via Shinkansen (Sanyo line). Between Okayama and Kurashiki, it is only 15 minutes by train. The station is 10 minutes from the Bikan.

Crossed by the Takahashi River, Kurashiki is pleasant for its canal. But it is especially famous for its historic district, the Bikan, with its unique architectural style. Formerly the merchants’ district, this district, which extends along the canals, is composed of former rice warehouses transformed into buildings dedicated to art (galleries, museums). Kurashiki was for a long time an important port city, which allowed it to develop the rice trade.

Kurashiki gives the impression of a medieval town (for the record, its electrical wires were buried so as not to take away its charm). But it is also a city of major cultural importance.

During a stay in Kurashiki, you can also opt for a boat trip on the canal. The towers last about twenty minutes and take you under bridges. It is really worth it during the cherry blossom season!

Around Kurashiki, you can visit the Kojima Peninsula or tackle the ascent of Mount Washuzan, which offers a magnificent view of the huge Seto Bridge, the bridge that connects the islands of Honshu and Shikoku for over 9 km.

Among Kurashiki’s culinary specialities, we generally find seafood products cooked in all their forms, especially in sashimi or tempura. 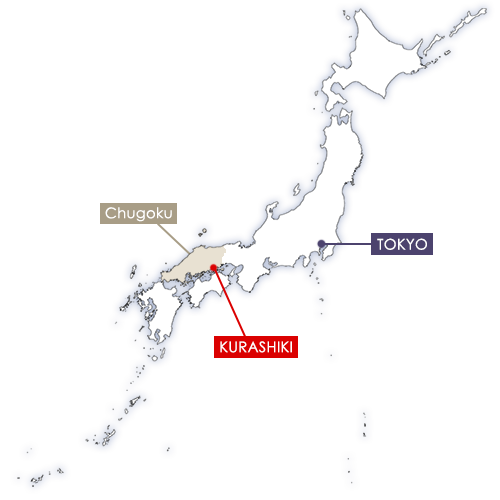 Where to sleep in Kurashiki