The seaside resort of Kanto

Kamakura is a city in the Kanto region, located on Sagami Bay. Not far from the capital, this city is easily accessible for a day from Tokyo, as the JR Yokosuka line connects the city directly in 50 minutes to 1 hour. In addition, Kamakura is also only 30 minutes by train from Yokohama.

At the end of the 12th century, Kamakura was the political centre of Japan, the declared capital of the Minamoto no Yoritomo shogun. The city remained the dominant centre of Japan until the 14th century. Today, the city is best known to tourists and locals as a seaside resort, and is highly appreciated in summer for its long beach.

Indeed, Kamakura is part of the Shonan seaside area, making it the preferred holiday destination for Tokyo residents seeking to escape the city for a day or weekend.

Among Kamakura’s places of interest is the Wakamiya Oji road lined with cherry trees and azaleas. Located in the centre of the city, it is one of the 100 most beautiful roads in Japan. To shop and eat traditional dishes, you have to go to Komachidori Street. The old-fashioned Enoden train is also an emblematic element of the city. Famous sites: the “Seven Entrances” of Kamakura, a major historical site in Japan, including the Asaina Pass, a UNESCO World Heritage Site.

Museums include the Kamakura Museum of Literature and the Museum of Modern Art, which contains a large collection of works by Japanese painter and ceramist Yasse Tabuchi.

During a stay in Kamakura, you can also take an excursion to Enoshima Island, in Sagami Bay, about ten kilometres west of Kamakura. It can be reached by the small train of the Enoden line, which runs along the coast, and reaches the island by a bridge. This island is famous as a seaside resort but it also offers some attractions to visitors such as the Samuel Cocking garden and its tower with panoramic views. 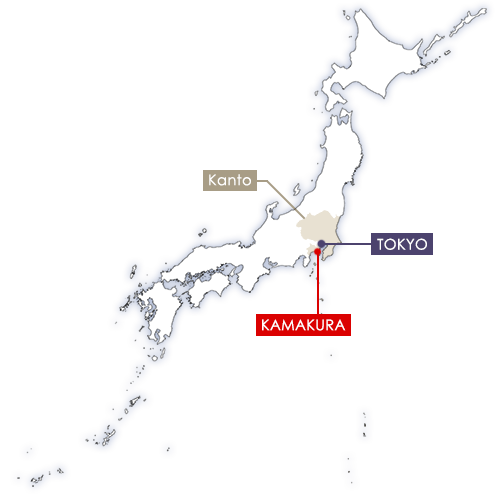