The main city in the Japanese Alps

Nagano is the capital of the eponymous prefecture on the island of Honshu. Located more than 200 km from Tokyo, Nagano is however directly connected to the capital by the Shinkansen (Hokuriku line): it is therefore possible to connect the two cities in 2 hours and a half.

Originally a small village, Nagano quickly became a place of pilgrimage and a prosperous trade, serving as a junction between the east and west coasts of Japan.

Nagano is now known for hosting the 1998 Olympic Winter Games. Indeed, the city is located in the Japanese Alps and is therefore very popular with winter sports enthusiasts. You can visit some of the infrastructure that was built for the Olympic Winter Games, such as the M-Wave (converted into a museum) or the Minami Nagano Sports Park (former Olympic stadium converted into a sports complex).

A stay in Nagano is also an opportunity to spend a few days in the mountains to ski or hike, depending on the season. There are also many hot springs (onsen) in the surrounding mountains. There are a few other interesting cities in the vicinity of Nagano, easily accessible by train or even by bus: Matsumoto (famous for its 16th century castle); Jigokudani (famous for its hot springs and Japanese macaques), or Mount Togakushi (famous for its ninja museum).

Points of interest also include the Shinano Art Museum, which exhibits works by local artists, including Higashiyama Kaii, and many works of art representing the Nagano region.

Nagano’s culinary specialities include shinshû soba, buckwheat noodles that can be enjoyed in hot broth; and oyaki meatballs with vegetables.

On the festival side, the Onbashira Matsuri festival is a must: it has been held every 6 years for 1200 years and lasts several months. Two events are not to be missed: Yamadashi in April (the procession of 16 trunks of fir trees cut by men is followed at the beginning of the festival) and Satobiki in May (parades with the trunks as stars, which will then be erected as pillars around the Suwa sanctuary). This festival is one of the most dangerous in the world because the heart of the ceremonies revolves around the very heavy fir trunks! 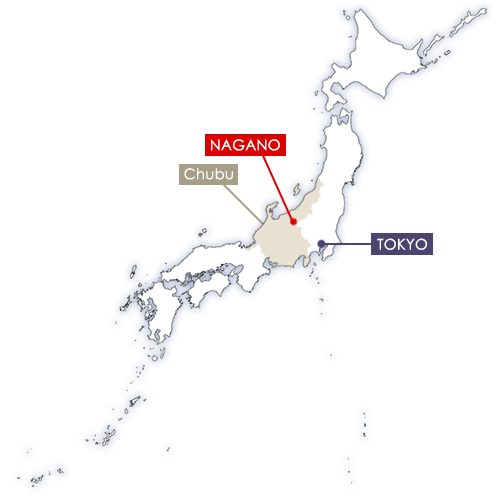 Where to sleep in Nagano