The spa town of Kusatsu

Kusatsu Onsen is a spa town in Gunma Prefecture, in the Kanto region of central Honshu Island. It is one of the best known and most famous in Japan with its onsen whose naturally rich water suffers from it is known for its therapeutic qualities.

Located northwest of Tokyo, Kusatsu Onsen is easily accessible from the Japanese capital by approximately three hours by train.

Kusatsu is fed by about a hundred springs that emerge from the strong volcanic activity of the place. In the centre of the village is the emblematic place called Yubatake, which means hot water fields, a large basin with wooden canals in which the hot water from the many springs flows in order to cool it down so that it reaches a reasonable temperature for its use.

Not to be missed in Kusatsu Onsen is the traditional Yumomi ceremony where women waving large wooden blades in a pool cool the water of the onsen while dancing and singing in folk costume.

The village also has small pools with free access for footbaths (ashiyu) in which visitors can rest.

As for nature walks and hiking, there are plenty of trails around Kusatsu Onsen, located in the Japanese Alps. Sainokawara Park, criss-crossing the hot springs, or the surrounding mountains, can be the subject of an excursion.

In winter, Kusatsu Onsen also has a ski resort that allows skiers and snowboarders to enjoy the slopes of Mount Shirane.

As for gastronomy, visitors will be able to taste onsen tamago, an egg cooked in hot spring water, which can be tasted with a dish of soba, Japanese noodles made with buckwheat flour, or onsen manju, which are cakes that are baked with the steam coming from the spring. 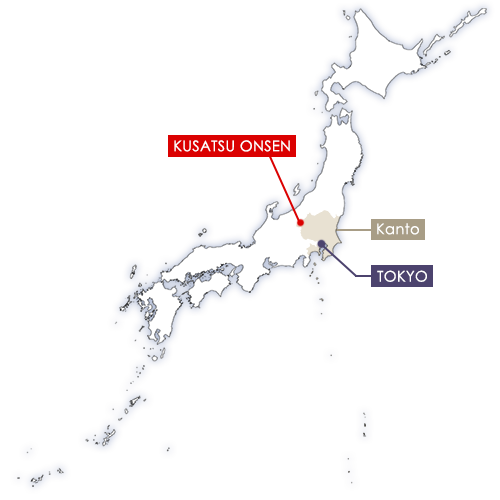 Where to sleep in Kusatsu Onsen