The city in the centre of Hokkaido

Asahikawa is a city located almost in the centre of Hokkaido Island, in northern Japan. Asahikawa, the second largest city in the region after Sapporo, is easily accessible by plane from Tokyo via its airport (about 1 hour 30 flight), or by train from Sapporo, and has a good public transport network. This transport facility makes the city a junction point for visits to smaller, more remote tourist towns in the surrounding area, such as Furano and its flower fields.

Located next to the Daisetsuzan mountain range, the town of Asahikawa also serves as an anchor point for hikers wishing to explore Daisetsuzan National Park, take the Daisetsuzan Asahidake cable car and admire the view of the region, or go to see the Hagoromo waterfall and enjoy the other natural areas in the area.

Knowing a harsh and well marked winter like the whole Hokkaido region, Asahikawa is known for its winter festival (Fuyu matsuri) which takes place every year in February and where you can admire huge ice sculptures with lights and fireworks.

For a relaxed shopping outing, the city has a shopping area near the main station, as well as a wide pedestrian avenue Heiwa dori kaimono koen with a wide variety of restaurants and shops; ideal also for a simple stroll.

As for visits to Asahikawa, tourists can visit Ueno’s farm and its garden filled with colourful flowers, or the snow museum, which offers a fascinating frozen world. The Asahikawa Zoo is also often acclaimed, as animals evolve in a so-called “ecological” environment and behave more naturally.

In terms of cuisine, the village of Le ramen will undoubtedly satisfy gourmets, where it is possible to enjoy it on site thanks to its eight restaurants. Soy sauce ramen is the city’s gastronomic speciality, which should be dissociated from Sapporo miso ramen. 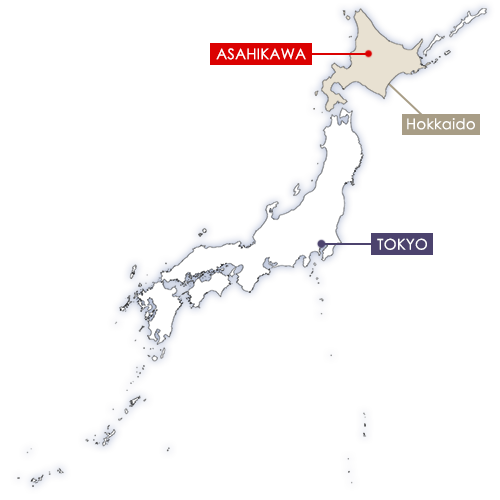 Where to sleep in Asahikawa