The city of the Awa Odori festival

Tokushima is located in the prefecture of the same name, on the island of Shikoku. Founded around Tokushima Castle in the 16th century, it was not officially recognized as a city until 1889, like most cities in Japan.

To get to Tokushima from Tokyo, the easiest way is to fly. There is about an hour and a quarter of flight time between the two cities, and JAL offers very affordable direct flights.

Tokushima is known as the starting point for the Shikoku Pilgrimage, which brings together more than 100,000 people each year. But tourists and locals also come to Tokushima for its Awa-Odori Dance Festival, which takes place in mid-August each year and is the event that attracts the largest influx of tourists to the city. This local folk dance, nicknamed “danse des fous”, dates from the 16th century and is very precise in its gestures and movement. Thousands of dancers participate each year in the Awa-Odori Dance Festival and march through the streets of the city.

To pay tribute to this traditional dance, the city of Tokushima hosts the Awa Odori Kaikan, a museum entirely dedicated to it. You can attend performances of Awa-Odori but also admire exhibitions of costumes and instruments used in street performances.

Another major tourist attraction in the city is Mount Bizan. It can be reached by foot or cable car, and its summit offers a magnificent view of the entire city. The walk is magnificent during the cherry blossom season! For another breathtaking view of the city, you can also climb up to the ruins of Tokushima Castle, on the other side of the Shinmachi-gaw River. This is an opportunity to stroll through the castle garden and visit the museum, which traces the medieval history of the city.

As for traditions, indigo dyeing and drawing are very typical of the city. Tourists can even learn the traditional techniques of this art at the Maison de l’Indigo. Those who are not gifted in the visual arts can try their luck at the Tenguhisa Museum, located in the former workshop of a doll designer, where you can learn how to make the famous bunkaru puppets.

As for gastronomy, Tokushima is renowned for its sudachi, a citrus fruit typical of the region. 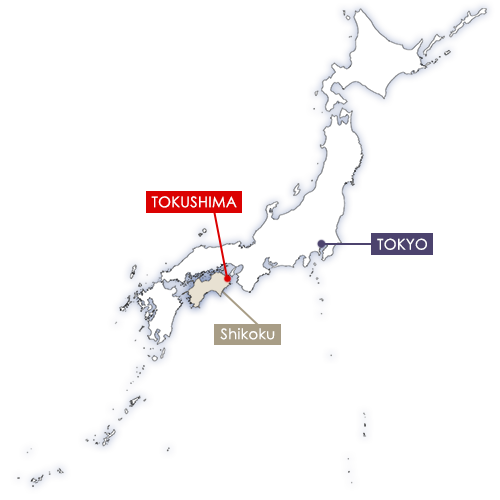 Where to sleep in Tokushima