The city of sand dunes

Tottori is a city in the Chugoku region, located in the south of Honshu Island on the west coast of Japan. Tottori is the capital of the eponymous prefecture and is easily accessible by plane from Tokyo, or by train from Kyoto, Okayama or Osaka.

One of the main attractions of the city is undoubtedly its sand dunes that run along the Sea of Japan. The Tottori dunes, formed by sediments carried over time by the Sendai River, are several thousand years old and are one of the most famous spots on the San-in coast. In the summer, many sports and tourist activities are available here, such as camel riding, paragliding and sandboarding. Not far from the dunes, the Sand Museum offers visitors the opportunity to admire gigantic and magnificent ephemeral sand sculptures that change every year and sometimes include 3D lighting (in order to be able to make the sculptures, the museum is usually closed the first three months of the year).

The ruins of Tottori Castle, former stronghold of the Ikeda clan, can also be visited. With only the foundations of the building remaining after its destruction in the 19th century, the park in which it is located is particularly popular in spring when the cherry trees are in bloom. Alternatively, to get a breathtaking view of the city and its valley, a hike from the ruins of the castle to the top of Mount Kyusho is possible.

Tottori also has a few thermal springs, one of the most famous of which is close to the town’s main railway station, but others are also located in the countryside and in the nearby mountains.

Finally, one of the agricultural specialties of Tottori is the pear around which many specialties can be tasted. In addition, every autumn there is a pear hunt called nashigari. 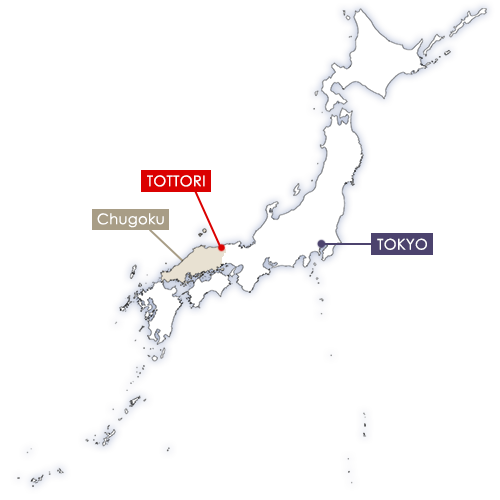 Where to sleep in Tottori