The city of the last samurai

Aizuwakamatsu is located in Fukushima Prefecture, in the Tohoku region of Honshu Island. Ancient feudal city, home to the Aizu clan, it was largely destroyed during the Boshin civil war of 1868, but the remains of its castle dating back to the end of the 16th century can still be seen.

Aizuwakamatsu is best known for its castle, Tsuruga Castle, which was partly rebuilt after the Boshin civil war and now houses a history museum. The castle park is magnificent during the cherry blossom season (April). Note that the moats and stone walls are original.

Aizuwakamatsu’s interests also include the Oyakuen Garden, built on the former site of an Aizu clan villa, and particularly renowned for its medicinal herb garden where ginseng is grown.

On the museum side, the Fukushima Prefectural Museum, not far from the castle, is a must: it is dedicated to the history of the region and contains many traditional objects. There is also a museum dedicated to the Byakkotai (warriors who gave their lives to defend the castle during the civil war) at the foot of the Iimoriya hill. The city is also known for the manufacture of lacquer objects or for its textiles.

In Aizuwakamatsu, you can also discover a replica of a samurai residence from the Tokugawa shogunate era; or relax in one of the ryokan along the Higashiyama thermal spring.

The natural landscapes around are also worth a visit, where you can enjoy the onsen or go to Mount Bandai. Lake Inawashiro, one of the largest in Japan, is not far either.

Aizuwakamatsu’s most famous culinary specialty is Wappa-meshi, a rice dish cooked and served in a cypress box, with several side dishes. 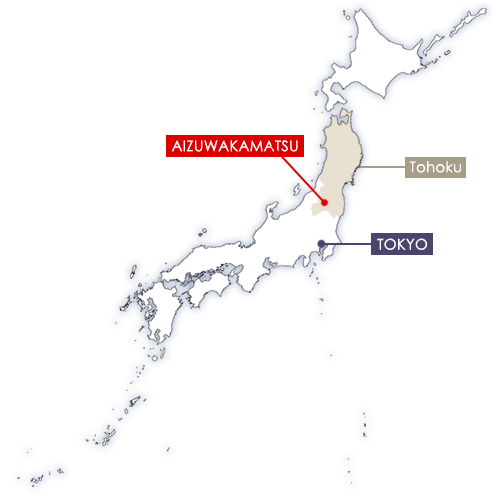 Where to sleep in Aizuwakamatsu