The city and its castle in Shikoku

Kochi is the capital of the prefecture of the same name, located on Shikoku Island. From Tokyo, you can reach it by plane: JAL offers direct flights (1 hour and 20 minutes) to Kochi Ryoma airport. Alternatively, from Okayama, you can take the Limited Express Nanpu train (2 hours and 30 minutes).

Kochi’s main attraction is its castle: Kochi Castle is one of the few white castles in Japan that has kept some of its original features. Indeed, the keep of the current castle dates back to 1601. For the record, it was humanist activists who, during the Meiji Restoration, asked for a park to be built around the castle to preserve it, rather than destroy it. The Castle also offers a magnificent view of the city and its surroundings.

In downtown Kochi, the main tourist attractions are the Harimayabashi Bridge, a small bridge that was the scene of the forbidden love story between a monk and a potter’s daughter, and the House of Osachi Hamaguchi (27th Prime Minister of Japan).

For museum lovers, the Kochi Prefecture Art Museum is not to be missed. You can see works by local and international artists (such as Marc Chagall), and you can also attend No Theatre performances in the museum lobby. The Museum of Sakamoto Ryoma’s Birthplace Museum is also very interesting, it is dedicated to Sakamoto Ryoma, a 19th century samurai and politician.

Nature lovers will enjoy a walk in the Godai-san mountain, which offers a magnificent panoramic view of the city and its surroundings and includes the Makino Botanical Garden of Kochi Prefecture, a magnificent 2.5 hectare garden that includes over 1500 varieties of plants.

Around the city, you can visit Katsurahama Beach, a sandy beach located 35 minutes by bus to the south of the city; but also the Chikyu 33 Banchi monument erected at one of the 10 places in the world where GPS coordinates contain the number 33 six times (longitude is 133*33’33” and latitude North 33*33’33).

Every year in August, the Yosakoi Matsuri, one of Shikoku’s major festivals, is held.

In terms of culinary specialities, Kochi’s Katsuo Bushi (a kind of “flakes” of dried, fermented and smoked bonito), mainly used as a condiment, is very famous. Katsuo no tataki, a bonito tataki, is also a flagship specialty of the city. 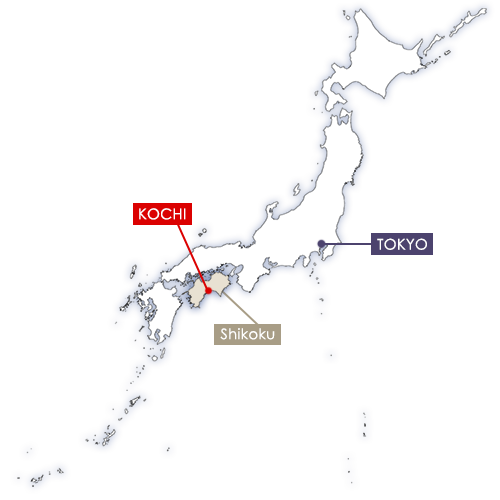 Where to sleep in Kochi