The ancient city of trees of Tohoku

Sendai is the capital of Miyagi Prefecture and the largest city in the Tohoku region, located in the northeast of Honshu Island. Nestled between the mountains (to the west) and the Pacific Ocean (to the east), it has long been known as the city of trees because of the many groves that were planted by residents several centuries ago. More recently, the city was particularly exposed to the great Tohoku earthquake of 11 March 2011, one of the most violent in Japanese history, whose epicentre was located 130 km from the city.

Despite this, Sendai is a prosperous city with many economic activities and nearly 50,000 companies in all sectors (textiles, rubber, crafts…), but also an important research and university centre with about fifteen universities.

Located about 350 km from Tokyo, Sendai is easily accessible from the capital, with more than 80 Shinkansen trains (Tohoku line) connecting the two cities daily. The journey is direct and takes between 1 hour 30 and 2 hours.

One of Sendai’s main tourist attractions is Sendai Abajo Castle, dating from the 17th century and known to have been an impregnable fortress in fact from its location on the Aobayama hill. The castle park offers a magnificent view of the city and the Pacific Ocean. The castle also houses the Sendai City Museum (Aobajo Shiryo Tenji-kan) where you can see many objects that belonged to the Date Lords family, as well as a reconstruction of the castle in synthetic images. Another museum not to be missed is the Miyagi Art Museum, where more than 4,000 contemporary Western (such as Klee or Kandinsky) and Oriental works are on display, and nearly 350 sculptures in the museum’s garden.

Apart from the castle park, one of the most beautiful views of Sendai is from the observatory located on the 31st floor of the AER building, where there are also many shops and restaurants.

Sendai is also very well known for its festivals, including the Tanabata parade in August and the jazz festival on Johzenji street in September.

In terms of gastronomy, Sasa-Kamaboko, a fish paste grilled over a wood fire, is one of Sendai’s specialities and so is zunda, a very sweet green soya paste. 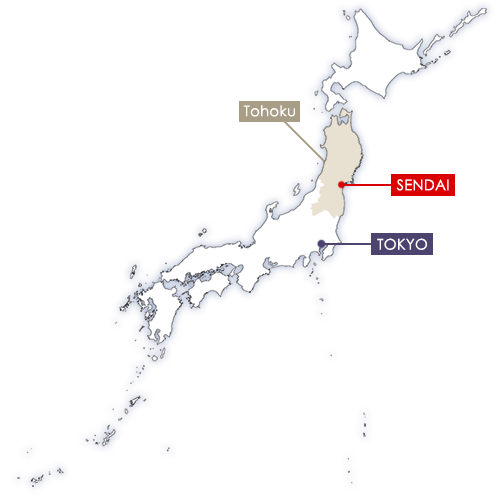 Where to sleep in Sendai