The city north of Shikoku

Takamatsu is the capital of Kagawa Prefecture, on Shikoku Island, on the shores of the Seto Inland Sea. Seat of the Matsudaira clan at the time of Edo, it was especially distinguished in its history by the naval battle of Yashima during the Gempei war (end of the 12th century).

Takamatsu is very well connected to Tokyo by plane, where there are direct flights of 1 hour and a half. To get there by train, you will first have to take the Shinkansen (Tokaido/Sanyo line) to Okayama, then change to the Marine Liner high-speed train. The journey takes between 4 hours 30 minutes and 5 hours 30 minutes.

Takamatsu’s main attraction is the Koen Ritsurin, a historic 17th century garden considered one of the most beautiful in Japan (it has been awarded the Exceptional Landscape label). It is divided into two parts, a Japanese garden to the south and a western garden to the north, spread over landscapes as far as the eye can see, ponds with bridges and green hills. The park is even more beautiful during the flowering cherry blossom season or in the fall when it is covered with maple trees.

During a stay in Takamatsu, you should not miss the famous red glass lighthouse on the harbour pier (the first in the world), on the Takamatsu waterfront (Sunport). This old cargo port is very pleasant to visit: it borders the Seto inland sea and is often very lively.

Takamatsu Castle (or Tamamo Castle) is also worth a visit, although only the two towers Tsukimi Yagura and Ushitora Yagura, rarely open to the public, remain from the old castle. For the record, it is one of the few castles in Japan to have been built by the sea and therefore to have a salt water moat.

The Busshozan district, a historic district of Takamatsu, is also a must: spared by the bombardments of the Second World War because it is far from the city centre, there are many old houses dating back to the Meiji era or even the Edo era!

Finally, Japanese history enthusiasts will enjoy an excursion to Shikoku Mura, an eco-museum that recreates a Shikoku village from the Edo period, at the foot of Yashima Hill.

As for gastronomy, Takamatsu is known for its sanuki udon, a broth of large udon noodles, a dish renowned for its economy. 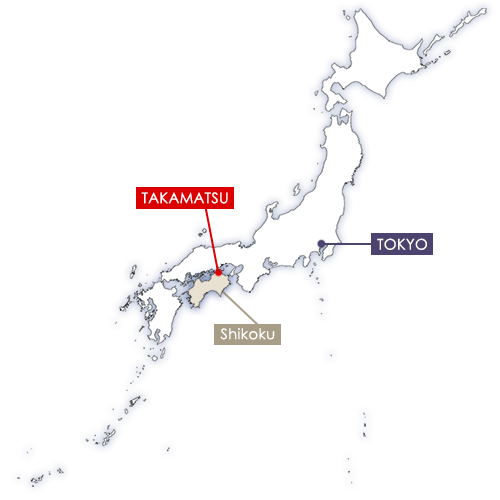 Where to sleep in Takamatsu